TRENTON, NJ —As New Jersey legislative elections heat up, the New Jersey League of Conservation Voters, the leading political voice on the environment and the only New Jersey environmental advocacy group that has an affiliated PAC and SUPERPAC, is pledging to devote significant resources to defeat the “Dirty Duo” of Sen. Joseph Pennacchio (R-Morris) and Assemblyman Robert Auth (R-Bergen) — the two incumbent candidates on the ballot with some of the worst environmental voting records. New Jersey LCV also unveiled an additional slate of legislative endorsements.

“The ‘Dirty Duo’ of Joseph Pennacchio and Robert Auth are on notice,” said New Jersey LCV Policy Director Henry Gajda. “As New Jersey LCV gears up to run our largest electoral campaign in state legislative races, we are planning on allocating significant resources to defeating these legislators because of their irresponsible and dangerous track record of voting against the environment.”

Pennacchio has a lifetime New Jersey LCV score of only 43% and has a track record of opposing the state’s efforts to fight climate change, opposing legislation that would uphold the Paris Climate Agreement as well as the Global Warming Response Act. He also opposed legislation, signed last year by Governor Murphy, that seeks to limit the cumulative impacts of pollution on the state's most overburdened communities, our predominantly low-income working families and communities of color.

At the same time Pennacchio has opposed legislation that would make New Jersey a national leader in modernizing and electrifying our public transportation sector to drastically reduce local air pollution, as well as proposals that give towns the tools to build green infrastructure that would help manage stormwater runoff.

Auth has an even worse New Jersey LCV lifetime score: a paltry 38%. Like Pennacchio, Auth has long opposed efforts to respond to the existential threat posed by climate change, including voting against common-sense legislation that requires local municipalities to factor the effects of climate change into their master plans.

Auth’s political positions also are corrosive to our democracy. His official Twitter account features retweets of posts supportive of former President Donald Trump and even dabbles in conspiracy theories at times. 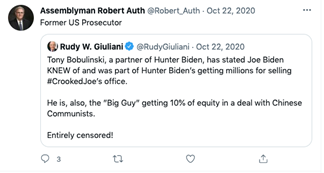 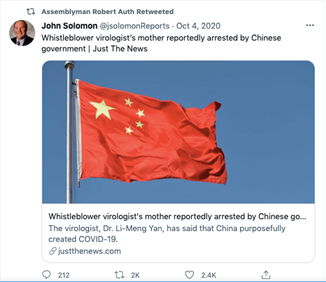 “Both Joe Pennacchio and Bob Auth are out of step with the people of New Jersey,” added Gajda. “It’s time that we send them packing so that families in Morris and Bergen counties get the representation they deserve.”

Pennacchio is facing a challenge from Democrat Christine Clarke and Auth is being challenged by Democratic Assembly candidates Karlito Almeda and Melinda Iannuzzi. All of the challengers in LD26 and LD39 have been endorsed by New Jersey LCV.

“We are thrilled to have such a strong slate of environmental champions running for office in New Jersey this year,” said Julia Somers, Board Chair of the New Jersey League of Conservation Voters. “New Jersey LCV is going to put the environment front and center during this campaign season, highlighting the crucial role our elected representatives play in curbing climate change and protecting the air we breathe and the water we drink. But we are not done with this most recent slate of endorsements, over the next two months, New Jersey LCV will be unveiling local endorsements for County Commissioners, Mayors and Town Councils throughout the state.”

"It's time for more leaders who understand the job-creating economic opportunities of positioning our state at the forefront of wind and solar development, the far-reaching implications of climate change across industries and sectors, and the importance of diligent collaborative work to ensure a just, fair transition," said Christine Clarke, State Senate candidate in District 26. "Our district needs officials who will lead on policy, while fighting to protect our water, forests and air quality here with appropriate funding. I am honored by this endorsement and committed to the work ahead."

"Together, we can make sure New Jersey not only protects its valuable natural resources, but takes meaningful action to make sure they are safeguarded for future generations. We can work for the funding we need to protect Lake Hopatcong and Greenwood Lake, and to ensure proper care so algal blooms don't close businesses' doors again. Thank you to the League of Conservation Voters for the important work you do, and your support as we move forward," said Pamela Fadden, District 26 State Assembly candidate.

"We simply cannot give polluters de facto control of our future, our natural resources and our communities' health,” said Melissa Brown Blaeuer, District 26 State Assembly Candidate. “Our ongoing fight to defend against expanding fossil fuel infrastructure includes the East 300 Project that threatens West Milford, Wantage, and the watershed reservoirs that serve millions of New Jerseyans for clean drinking water. Serious challenges are happening right now that require people like us in Trenton -- willing to fight for all we hold sacred and be stewards for the future.”

"It is a tremendous honor to be endorsed by the New Jersey League of Conservation Voters. As Chairman of the Environment and Solid Waste Committee, I will continue to champion important environmental causes on behalf of all New Jerseyans to ensure a greener, sustainable future,” said Assemblyman James Kennedy.

"I am incredibly proud to receive the support of the New Jersey League of Conservation Voters, an organization that has been a vociferous advocate for justice and equity in environmental policy,” said Senator Troy Singleton. “Their mission aligns with much of the work that I have done during my first Senate term to prioritize environmental justice, promote clean energy equity, and safeguard our drinking water. I look forward to working with the New Jersey LCV on our shared policy goals in the future and am humbled by their endorsement of my re-election to the Senate."

“It is an honor to receive the endorsement of New Jersey LCV, and I remain committed to protecting our natural resources from the boardwalk to farmlands. I look forward to continuing to work alongside New Jersey LCV on many issues including bringing more clean energy jobs to Atlantic County,” said Assemblyman Vince Mazzeo.

“I want to thank the New Jersey League of Conservation Voters for their endorsement,” said Assemblyman John Armato. “As a lifelong resident of western Atlantic County, I have seen first hand the effects climate has on our farmers and coastal communities.  A clean and healthy environment benefits us all, residents and tourists alike, and I look forward to working with LCV in the future.”

“I am humbled and honored to receive the endorsement of the New Jersey League of Conservation Voters. Atlantic County experiences the effects of climate change every day, and I am proud of my record fighting to ensure our future generations inherit a healthy and sustainable world. I look forward to continuing this important work in the legislature,” said Caren Fitzpatrick, running for assembly in LD2.

Ruth Dugan, running for Senate in LD39 said, “I am so proud to receive the support of New Jersey LCV. When I became the first Director of the Bergen County Office of Energy more than 40 years ago, I couldn’t have imagined the progress we’d make in advocating for clean air, clean water, and open spaces across District 39. As we continue to face the most urgent climate crisis in our lifetimes, I am committed to working with LCV to make sure that we protect our planet and pave the way for a sustainable, clean energy future.”

“In high school I was part of a volunteer team that worked to clean up illegal dumping sites and hiking trails in Mahwah,” said LD39 Assembly Candidate Karlito Almeda. “I am humbled that years later, to be able to continue this work to ensure our State has clean air and drinking water, and ensure a sustainable future. I thank the League for their support for Ruth, Melinda and myself.

“I am honored to receive the endorsement of the New Jersey League of Conservation Voters,” said LD39 Assembly candidate Mayor Melinda Iannuzzi. “If elected, I will work to protect the natural beauty of our great state and to acknowledge that climate change is a challenge that we must confront in order to keep our state and its residents safe and healthy.”

“I am honored to receive the endorsement of the New Jersey League of Conservation Voters. As a father, I understand the importance of fighting for environmental policies that ensure future generations inherit a livable world, and I look forward to working with New Jersey LCV in the Assembly,” said LD8 Assembly Candidate Mark Natale.

Also endorsed for Assembly in LD8, Allison Eckel said, “I would like to thank the New Jersey League of Conservation Voters for their endorsement of my candidacy. It is crucial that we pursue legislation that conserves our natural resources for future generations and brings us into a sustainable 21st century economy.”

“I’m extremely honored to receive the endorsement from the New Jersey League of Conservation Voters, and look forward to working with them in the fight against climate change,” said LD25 Assembly Candidate Patricia Veres, former Wharton Councilwoman. “New Jersey has to ensure that voices from our underrepresented communities are at the table when making decisions to combat climate change to ensure the actions we take equitably serve all New Jerseyans.”

“I am grateful to have the support of the League of Conservation Voters,” said Lauren Barnett, LD25 Assembly Candidate, former Mayor and current Deputy Mayor of Mountain Lakes. “As a local elected leader, I’ve worked to ensure we are making investments in our environment to keep our lakes, shade trees, and woodlands healthy. In the Assembly, I look forward to taking that experience and working with New Jersey LCV to make New Jersey a greener, cleaner, and healthier state.”

“I am thrilled to have the support of the New Jersey League of Conservation Voters,” said Jeff Grayzel, LD25 Senate Candidate, Mayor of Morris Township. “Morris Township has been a leader in environmental policies. As Mayor, we banned single-use plastic bags from our stores, worked to make EV charging stations more widely available, and restricted invasive species planting to protect our natural environment. In the Senate, I look forward to working with New Jersey LCV to combat climate change and ensure that New Jersey continues to be a national leader in environmental policies and justice.”